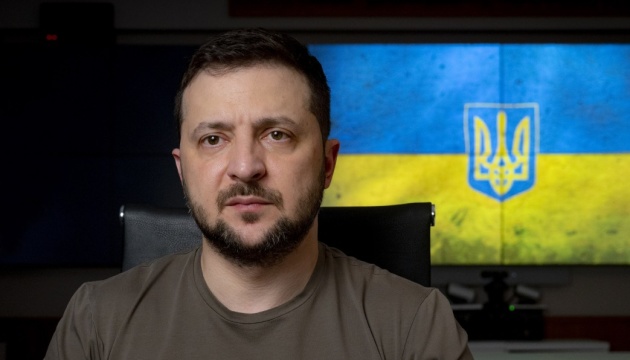 This is according to the press service of the head of state, reports Ukrinform.

Thank you for giving me the opportunity to speak to you.

Last year, at the fourth Copenhagen Democracy Summit, the question arose of where the front line between freedom and oppression lies and how to protect freedom from authoritarianism. Well, this year we got the answer to that question not just in discussions, but on the battlefield.

This year has shown that the state border of Ukraine is a real line of confrontation. But between what and what? Right between freedom and oppression? Or just between democracy and authoritarianism? Yes, between them. But this confrontation can also be seen from another point of view. It can only be assessed in terms of political regimes or ideologies. It must also be examined in terms of the ability to turn a word into action. It is the fundamental capacity of any system – public, state, commercial. If this ability is not missing, the system loses.

Of course, we are all raised in cultures that value the word. And the democratic system is always based on the fact that the word counts. And I don’t want to underestimate the importance of discussions, opinions and positions.

I would like to draw your attention to the fact that it did not take long for a system to turn words about a supposedly non-existent people into brutal hostilities aimed at destroying that people. Or turn words that a territory is supposed to be part of another state into action to capture that territory.

Can democratic systems help this nation that becomes a victim of aggression as quickly as tyranny triggers aggression? Does the democratic world have the tools to defend this territory, which someone over there has decided to seize, just as quickly?

Last year, at a summit like this, such words could be the basis for an interesting discussion about the power of Europe and Russian tyranny. But this year we see that these are absolutely practical questions on which the fate of millions of people directly depends – and, in fact, not only in Ukraine. Because the Russian state is interested in a much larger territory than the sovereign territory of Ukraine, and Russia does not recognize the right to independent existence not only of the Ukrainian people.

Let’s take a closer look at some words that have yet to turn into action.

Speech is always the basis of law. This is still the basis of the treaty. Conventions, statutes, declarations and, of course, memoranda. During the Russian war against Ukraine alone – and it has been going on, I remind you, not since February 24, but since 2014 – Russia violated about four hundred different international treaties to which our states are party. Here are some examples :

Charter of the United Nations;

United Nations Convention for the Suppression of the Financing of Terrorism;

United Nations Convention on the Prevention and Punishment of the Crime of Genocide;

Corpus of Conventions Governing the Laws and Customs of War;

International Convention for the Protection of All Persons from Enforced Disappearance;

Convention for the Protection of Cultural Property in the Event of Armed Conflict;

United Nations Convention on the Elimination of All Forms of Racial Discrimination;

United Nations Convention on the Law of the Sea.

From key global documents, we can move on to fundamental documents for Europe. The Russian state violated:

European Convention for the Protection of Human Rights and Fundamental Freedoms;

Statute of the Council of Europe.

And we should all remember the Budapest Memorandum, the violation of which by Russia adds maximum cynicism to this picture. With this violation, Russia has ended the entire struggle for nuclear disarmament in the world.

What is the point of talking about nuclear disarmament now that Ukraine, whose third largest nuclear arsenal has been removed, has been attacked by a State which was among those who signed the pledge to refrain from all aggression and which still a nuclear state?

Democracy is always respect for words. International law is also respect for speech. But they work and can only win in confrontations when they can be backed up by action. When a word literally means action.

So, coming back to the question of where the confrontation line is between freedom and oppression, it should be said that it is also between the ability to simply say something and the willingness to act to reinforce certain words – promises to voters, words in negotiations and texts of conventions.

If polls show that 71% of Europeans see Ukraine as part of the European family, why are there still political skeptics reluctant to allow us to join the European Union?

If Europe’s core values ​​mean that every nation is equally important and must be equally respected, why have the Ukrainian people been told for so long that they should remain in the gray area between the European Union and Russia?

If Russia cynically violates literally every vital document of international law, why are there still those who are reluctant to block any relationship with such a state?

These questions indicate, indeed, that the European system can lose if words are not matched by deeds. A democratic system can lose even on our continent if there is no action.

So, first of all, we must finally remove this gray area, so tempting for the Russian state. We must move from words that Ukraine is part of the European family to actions. In the weeks to come, the European Union can take a historic step which will prove that words about the Ukrainian people’s belonging to the European family are not in vain.

Secondly, effective and legally binding security guarantees are needed in a renewed security architecture for the European continent. We are currently working on such a safeguards system for Ukraine. And only when it appears can we say with confidence that the thousands of words on the pages of conventions, statutes, treaties and memoranda are not just words, but reality backed by deeds.

Finally, we must also learn to act preventively. Not just to react, but to act as soon as aggressive words are heard. When it becomes clear that war can start at any time. The aggressor must feel the power of the democratic world, the power of international law as soon as he intends to violate existing fundamental norms.

And the third mandatory point is that all war criminals must always be held accountable. Justice must have its say. And the word of justice must be backed up by deeds.

For every death inflicted in Ukraine by Russian soldiers, for every torture and rape, for every city destroyed, for the deportation of people and children, both those who did it directly and the Russian commanders and politicians who gave such orders must be held accountable.

Democracy must be effective – in every way. Europe must be efficient. If words are said, if they have been put on paper and have become documents of international law, they must work. They must act.

And when that happens, there will be no question of who wins and where that front line is. Of course, democracy. Of course, Europe. And especially in the minds of leaders who must act, not just talk.

Thank you for your attention.

Six arrested for fraud in the work recalibration program

History, meaning and everything you need to know