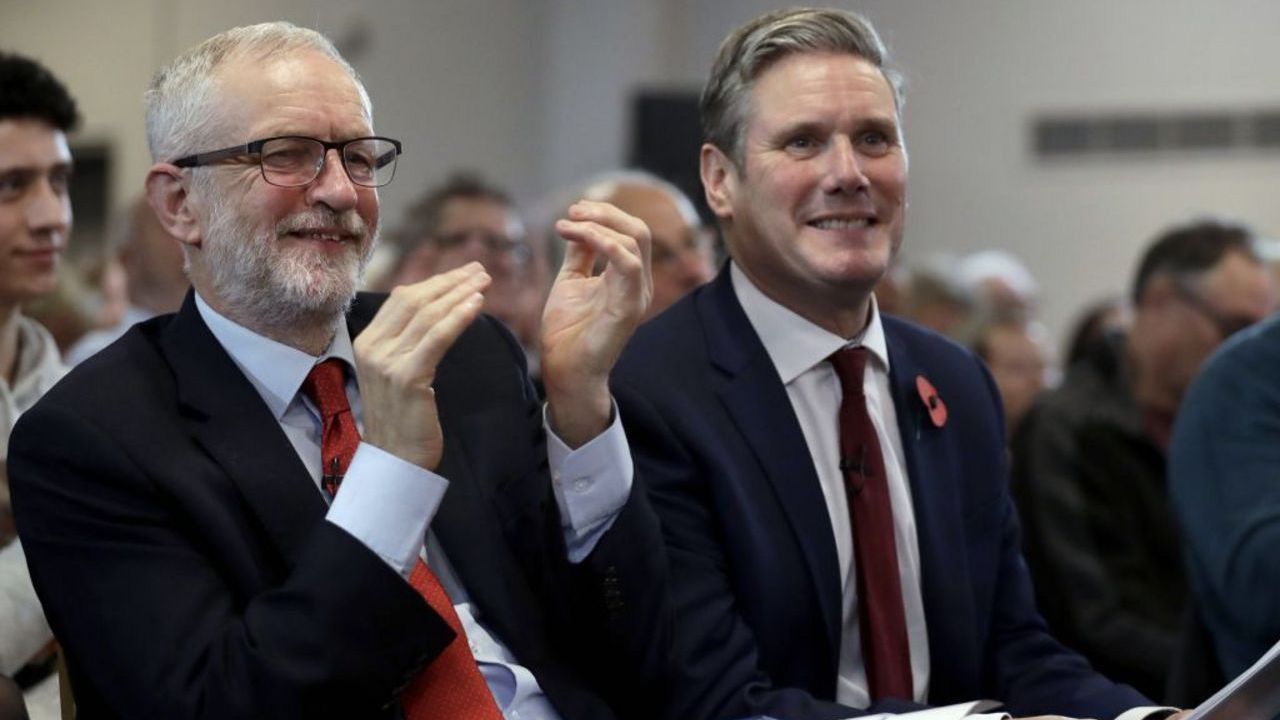 UK: Starmer threatens to expel Corbyn and all Labor MPs who do not support NATO war on Russia

Labor leader Sir Keir Starmer told the Time On May 3, he would expel any Labor MP who did not declare “unwavering support for NATO”.

Starmer, who has repeatedly called Labor the ‘party of NATO’ during its proxy war with Russia in Ukraine, said it was ‘very clear’ support for the alliance military was at “the root of the Labor Party”.

Times Radio had earlier reported that Starmer’s allies wanted him to force far-left MPs out of his party before the next general election. Asked by the Time Commenting on the report, Starmer replied, “We have been very clear about the expectations of our parliamentarians when it comes to issues like anti-Semitism, when it comes to the false equivalence that some argue between Russian aggression and the actions of NATO. I was very, very clear about this. And I will be very clear and firm on these issues.

When asked to clarify whether he would act against his own MPs, Starmer replied: “Yes, these are principles which are absolutely the root of Labour, the center of Labour…”

Starmer has indeed clarified not only that the de facto expulsion of former leader Jeremy Corbyn will be made permanent, but that it will be followed by similar treatment meted out to any Corbyn allies who are unwilling to stand down. pledge to support the NATO war.

The only thing that could prevent expulsions, given that hundreds of thousands of socialist-minded members who joined Labor under Corbyn have since left the party, is the complete lack of political principle that characterizes the Corbynite left.

On February 24, 11 Labor MPs, the rump of the Corbynite Socialist Campaign Group (SCG), collapsed over a threat from Starmer to remove the party whip if they did not withdraw their signature of a Stop the War Coalition ( STWC) statement calling for a halt to NATO’s eastward expansion and a negotiated settlement with Russia. All did it within an hour, including Corbyn’s closest allies, former shadow Chancellor John McDonnell, former shadow Home Secretary Diane Abbott and SCG leader Richard Burgundy.

On January 21, 11 other SCG MPs had announced a new group that would try to “lobby” and “lead” Starmer “rather than resist or impeach him”.

A day later, on February 25, Starmer suspended the Twitter account of the party’s youth wing, Young Labour, and deleted its annual conference for criticizing Labor for “supporting NATO aggression”.

McDonnell made amends by addressing a pro-Ukrainian protest in London alongside warmonger Paul Mason, while Abbott said in a TV interview: “Nobody wants to attack NATO…I’m a staunch supporter of Keir Starmer”. Both then retired from the platform of an STWC rally.

The only MPs now backing the gutted remnants of the STWC are Corbyn and Claudia Webbe, both of whom have already had the Labor whip removed. Despite this, demands persist for McDonnell and Abbott to be removed with “as many Corbynites as possible,” according to Blairite sources.

the Time quotes a source saying, “Keir should have fired them then… Forcing them back wasn’t enough. He still has to share a party with them. Another said that Starmer wouldn’t necessarily need a pretext like the STWC letter, because “when you control the NEC [national executive committee] there will always be a way.

The collective softness of the Corbynite “left” is nauseating. Both McDonnell and Abbott will be in their 70s when the next general election comes around, with big pensions awaiting them in retirement. But they would rather end their Labor days covered head to toe in political filth than take a stand on the so-called principles on which they have built their political reputation over decades.

However, this is not a betrayal of “JC” by his followers, as some desperate Corbyn supporters argue. He leads these political scoundrels and sets the tone for their response to Blairite threats with his own constant retirements during his five-year tenure as party leader and after his replacement by Starmer. It is not for nothing that McDonnell recently responded to Starmer’s attacks on Corbyn for criticizing NATO by tweeting: “A commitment to NATO has been Labor policy democratically determined by the party conference and accepted by every Labor leader to be included in every Labor manifesto, including by Jeremy Corbyn. , since the creation of NATO.

It was already clear there was no way for Corbyn to become a Labor MP again. On October 29, 2020, the Equality and Human Rights Commission released a report that was the product of the witch hunt organized by Blairist and Zionist groups, exposing criticism of Israel’s repression of Palestinians as being anti-Semites. Corbyn has never opposed the expulsion of even his closest supporters on such trumped up charges. But six months after being replaced by Starmer, he said the ‘scale of the problem’ of anti-Semitism within Labor was ‘dramatically exaggerated for political reasons by our opponents within and without of the party, as well as by a large part of the media”. .

Corbyn was suspended from the party the same day. He was readmitted by the NEC on 17 November, but Starmer refused to reinstate the party whip, forcing him to sit as an independent in parliament. Corbyn was told he must “unequivocally, unambiguously and unreservedly apologize” for his comments before readmission was considered. Last November Starmer said Corbyn might not be allowed to stand as the Labor candidate in Islington North at the next general election unless he did.

For months, Corbyn’s only political response to his expulsion was to set up the Peace and Justice Project. This one-man vanity operation gives him a platform from which to pontificate on the official ‘left’ and ‘peace movements’ around the world, as he speaks ‘in a personal capacity’ during countless small demonstrations and small events organized by the constituency Labor Party. branches and local unions – carefully avoiding any conflict with the party that pushed him into this political desert.

On April 20, Corbyn gave two media interviews that highlighted the miserable nature of his opposition to Starmer et al. On Times Radio, Corbyn asked rhetorically, “Do military alliances bring peace? He added: “I would like to see a world where we finally start dissolving all military alliances.”

After posting these political bromides about a future without militarism, Corbyn stressed, “I don’t blame NATO for the fact that Russia invaded Ukraine” and reassured his right-wing audience that if he was the leader Labor, he “would support Ukraine. right to self-defense. »

An interview with the Standard that same day was a prolonged plea to Starmer for the past to be over. Stressing that he wanted to stand for Labor in the next general election when he turns 73, Corbyn noted that he had not spoken to Starmer for two years. If he had the chance to, “I would say I think Keir, we need to move on…and I should be reinstated in the PLP [Parliamentary Labour Party]…” It was “irritating the way I was treated. And I have not engaged in any kind of personal vendetta attacks and do not intend to as far as I am concerned…”

He told his constituents in Islington North London: “I am proud to be your MP, and hope to be your MP in the future as a Labor MP.”

When asked if he would stand as an independent if not readmitted to Labour, he replied evasively: “let’s take care of that bridge when we get there”.

Four days later, Starmer predictably reiterated to the BBC Sunday morning, “It is very difficult to see how” Corbyn could ever be reinstated in the party after his cutesy comments on NATO.

Corbyn’s bowing to the right continues to take a heavy toll on his political allies. Even as the vicious onslaught against even the most partial expression of popular anti-war sentiment intensifies, the witch hunt against anti-Semitism rumbles. While Corbyn and McDonnell were scheduled to speak at the Socialist Workers Party (SWP) Marxism 2022 event, the Jewish Chronicle denounced him for mounting a platform with “anti-Semites”. After slandering well-known rapper Lowkey and Palestinian scholar Shahd Abusalama of Sheffield Hallam University, the newspaper reported that the Jewish Student Union was demanding that Queen Mary University of London cancel the upcoming event.

However, conditions emerged to overcome Corbyn’s damage to the political development of the working class.

Corbyn became Labor leader in 2015 and defeated a Blairite attempt to overthrow him in 2016, because broad layers of working people and young people were looking for a way to oppose the destruction of their living standards and their democratic rights – and because of Corbyn’s long career. record of opposition to war and imperialist oppression. His downfall is not because he supported these views, as the mainstream media claims, but because he betrayed those who believed he would fight for them.

Today, nothing remains of the claim, trumpeted by pseudo-left groups such as the Socialist Party and the SWP, that Corbyn was leading a socialist transformation of Labour. Labor policies are more right wing today than when Corbyn became first leader. More fundamentally, Starmer is in competition with the conservative government to be the first representative of imperialist warmongering against Russia.

As for Corbyn himself, he has rejected all pathetic calls for him to lead a new “left” party. Instead, he has made it known that his “pacifism” does not go so far as to oppose NATO plans to wage a war for regime change in Russia, even when it raises the threat of a nuclear annihilation. His explicit goal is for Starmer to grant him an audience where they can discuss his reintegration into a party of austerity, militarism and war, led by McCarthyist witch hunters.

These exhausted forces are unable to capture a working class radicalized by rising prices, pushing a new wave of industrial action and repelled by the mad war propaganda of all official parties and the media. This movement will find a political path forward in the Socialist Equality Party’s record of opposition to Corbynism over the past seven years. To defend the working class at home and to oppose the march towards war is to join the PES.

A Run, A Walk for Hope, A Home in Watsonville – Santa Cruz Sentinel