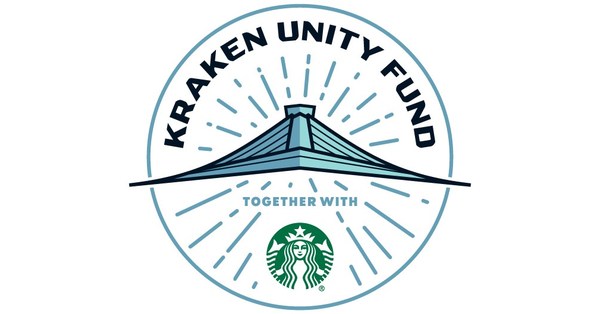 The Bonderman family-led ownership group will donate $32,000 every home game to a non-profit organization in the Pacific Northwest

SEATTLE, May 24, 2022 /PRNewswire/ — Today, the Seattle Kraken announced that it will honor and celebrate a community hero and nonprofit organization of its choice with a grant of $32,000 every regular season Kraken home game, starting next season.

the Kraken Unity Fund with Starbucks marks the evolution of the highly successful Starbucks Community Stars program, introduced in the team’s inaugural season.

The donation, by the Kraken ownership group led by David Bonderman and Samantha Holloway, showcases the franchise’s commitment to the community and the Pacific Northwest. Fans will be invited to nominate people who exemplify the values ​​of the Kraken’s nonprofit, One Roof Foundation, are inspiring leaders in their neighborhoods, and help us come together. Starbucks will hold a community service day at the start of each season and celebrate the recipients and their chosen nonprofit organizations at an annual event held at the end of each season.

“My family has always believed that the power of the Kraken organization and the One Roof Foundation is that it is rooted in our community and can be a way to bring people together and recognize their goodness,” said Holloway, president. of the executive committee of Seattle Kraken. . “That’s why we want to honor the heroes and organizations that are making a difference in the Pacific Northwest. There are so many inspiring stories, and it’s our privilege to be able to tell them.”

The first round of nominations will be accepted between May 24and and August 1st and candidates can be from all over the Kraken Territory of Washington, Oregon, Alaska, Idaho and Montana. The selection will be led by the One Roof Foundation Board of Directors, in collaboration with the Kraken and Starbucks. The nomination form and more information can be found here.

“Being part of the Kraken’s inaugural season in our hometown, Seattlehas been a privilege over the past year,” said Camille Hymes, Vice President, US Community Impact at Starbucks. “As part of our pursuit Community Impact Partnershipwe look forward to growing and evolving our community recognition program under the new name, Kraken Unity Fund, with Starbucks, to elevate and support so many great nonprofits in the Pacific Northwest.”

“Hosting Starbucks Community Stars winners at our games this season has created many magical moments,” Seattle CEO Kraken said. Tod Leiweke. “We know the Pacific Northwest is home to both people and organizations that do incredible work to unite our community. Our Owners Group is dedicated to this region and making us better together and I’m thrilled to see the impact of subsidies.”

$32,000 will be awarded in representation of the Seattle Kraken becoming the 32 in the NHLn/a franchise and to represent the 32,000 fans who deposited a deposit for a then unknown and unnamed team in March 2018.

About Seattle KrakenThe Seattle Kraken is the new National Hockey League franchise, entering its second season at Climate Pledge Arena. To visit www.nhl.com/kraken for the latest news and information, including press releases, multimedia content and the latest hiring.

About StarbucksFrom store to store from Seattle Pike Place Market in 1971, to nearly 34,000 stores serving customers worldwide – for 50 years, Starbucks has always been about more than great coffee. After all, our mission at Starbucks is “to inspire and nurture the human spirit, one cup, one person, and one neighborhood at a time.”

We have a responsibility to strengthen our communities. And know that Starbucks’ impact in communities is greatest when our efforts begin with our partners who know their neighbors best.

Nowhere is this truer than in our hometown of Seattle – where we have worked with our neighbors and partners to help strengthen our community for 50 years.