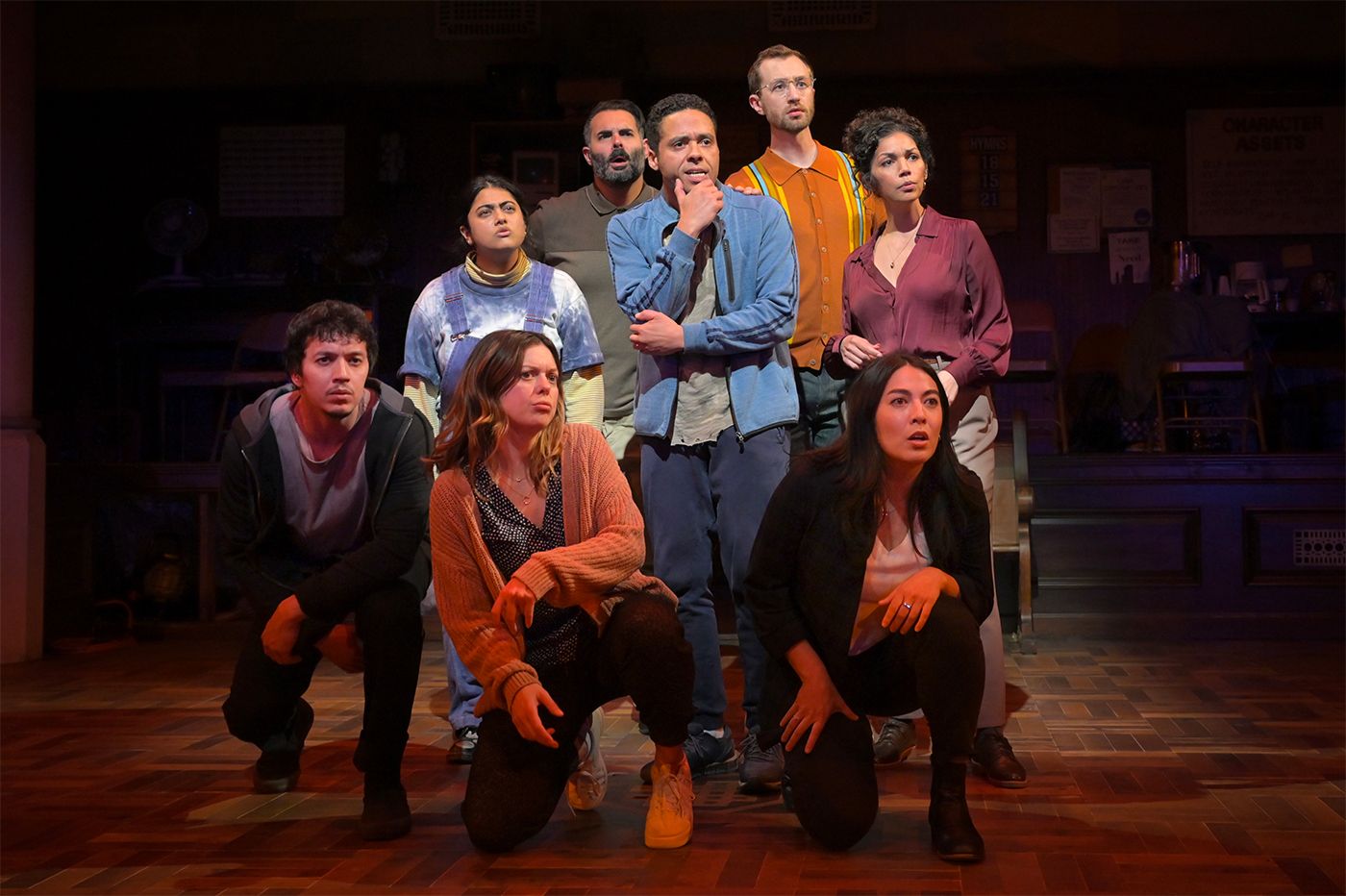 Something Changed in Me About Four Songs in the Extraordinary New Musical for Chamber Choir Octet at Berkeley Rep, and I went from a passive, half-engaged spectator to a willing participant in the room. It was a chemistry that I imagine a lot of people felt as composer Dave Malloy’s piece attempts to engage us in a form of group therapy about what the internet is doing to all of us.

The setting is a church basement or rec room – a familiarly depressing, neglected space with wood paneling, an aging carpet, folding chairs, a dusty coffee machine, and bland statements on the wall belonging to the one or the other 12-step program that has its meetings there. (Amy Rubin and Brittany Vasta’s set is very authentic, and a vibe in itself.) The group of eight having their reunion is called Friends of Saul, and Saul is variously referred to in the show as possibly real, or perhaps a bot, or god figure, who brought together this collection of addicts with various app and internet persuasions to sing in beautiful harmony.

The format and structure of Octet — which originally premiered off-Broadway at New York’s Signature Theater in 2019, a year before the pandemic, with much of the same cast as that production — is a work of genius in and of itself. Octal forms are at the heart of computing – there are eight bits in a traditional octet, also called an octet, for example – and octets date back centuries in Western musical tradition. A traditional choral octet, which is what Malloy employs in the cast of this musical, is sometimes referred to by the acronym SSAATTBB (short for 1st and 2nd soprano, 1st and 2nd alto, 1st and 2nd tenor, baritone and bass).

And by Jehovah, this octet can sing. After tightening some of those harmonies in the original airing three years ago – all but one of the eight original cast members reprized their roles for this second production – each a cappella piece rises and floats through the room with power. elegant and urgent.

Jessica’s (Margo Siebert) character kicks things off by recounting how she was humiliated and then canceled on social media over a not-fully-explained “incident” filmed that she calls her “white woman video. who is going mad”. The ensuing song, “Refresh,” is a catchy and moving odyssey describing how she became a “tragic victim of the mob spirit” of the modern internet.

In bluegrass-tinged “Candy,” we learn about Henry (Alex Gibson) and his addiction to mobile games (the refrain being “All the games I like have candy in them”). In “Glow,” we hear Paula (Isabel Santiago), the group’s moderator, talk about the tragedy of lying in bed with someone you love, each of you in your own screen world, increasingly more separated. And in “Solo,” we hear from Karly (Kim Blanck), as she experiences the gender-based abuse that comes with dating apps.

A few numbers, like the comedic but powerful “Little God”, get into deeper things, like how people debate meaning, conspiracy, science and religion in online forums – shedding light on the way smart people can literally explain anything via science and “future technology”, even if it was a miracle happening right before their eyes. JD Mollison, as Marvin, does a wonderful job with this complex 11-minute monologue. And I can’t neglect to mention Kuhoo Verma’s wondrous performance of Velma’s clumsy, intense, and tarot-obsessed, who delivers the final, quietly powerful solo number, “Beautiful,” near the end of the piece.

The central “anthem” in the middle of the show, “Monster”, is a primitive-sounding ensemble chant that focuses on the central antagonist of Octetthe monster that is the social internet.

“Will the monster finally go too far? the cast sings. “As you watch the monster, it digs deeper into your brain, transforming neural pathways with its toxic chorus…”

Malloy’s best-known work to date is the Tony Award-winning Natasha, Pierre and the great comet of 1812which was based on a segment of War & Peace, and which was also impressively complex in its musical composition and its nods to Eastern European songs. Octet further proves Malloy’s talent for acrobatic musical feats and stunning harmony, yet he turns each song into an intimate, plaintive plea – a testimonial between friends, or at least between trusted band members seeking the same salvation.

Malloy wrote not only the music and lyrics, but also the book for the show, and all three are dense, layered, and non-cliched. And with director Annie Tippe’s deft hand orchestrating the octet interactions and Or Matias’ tense musical direction, the show comes with several intense climaxes and an incredibly moving denouement.

But that brings me back to how, in the space of Peet’s Theater at Rep’s Berkeley, everyone is one with the band in that church basement. The subject is close to home for many of us, and you’ll never experience a finer delivery of a warning message about your screen time. They sit in a circle, but the audience sits all around them, and octet harmonies like this have a magical, communal power.

As the group wraps up their meeting for the evening – singing “Beyond Good and Evil There Is a Field, I’ll Meet You There” – you’d almost believe that such a new form of quasi-spiritual liturgy of the internet age exists, and that bands like these have learned these beautiful hymns to comfort each other, and themselves, when they need to stop scrolling.

‘Octet’ plays through May 29 at the Berkeley Rep. Find tickets here.