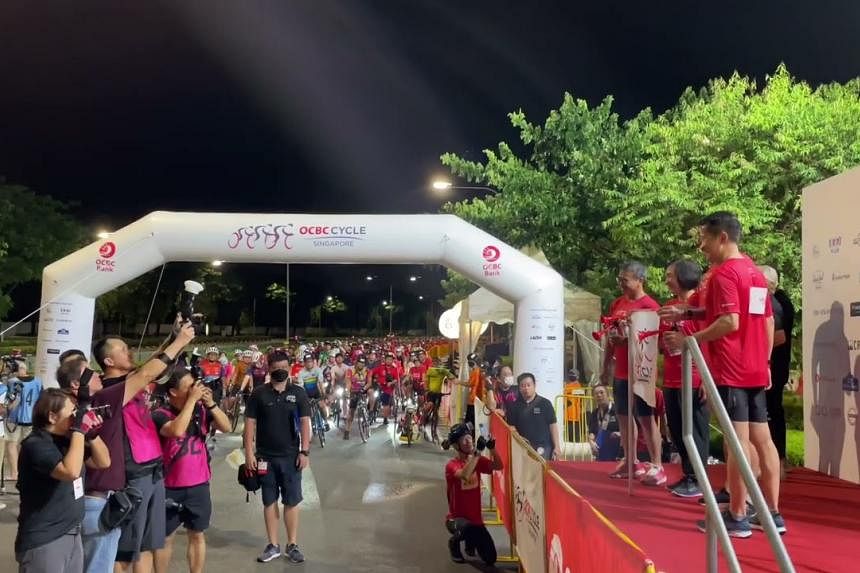 SINGAPORE — Sunday mornings are usually reserved for sleepovers, but around 2,000 cyclists turned out to Nicoll Highway in the early hours of May 8 as the 2022 OCBC Cycle City Ride returned after a two-year hiatus.

Lively cheers rang out along the highway at 5 a.m. as Culture, Community and Youth Minister Edwin Tong signaled the 19km physical cycling event before joining the second wave.

Despite the light drizzle, Anthony Lim, who was participating for the first time, really enjoyed the experience.

“As the day of the event approached, I felt so excited like a little kid,” said the 52-year-old senior manager, who only started riding the bike last September.

“I really enjoyed seeing so many riders get off today. I could see their energy and positivity about being back on the road on their bikes.

“The feeling of being at a physical event is completely different. I can feel the crowd around me. Even before we were flagged, you could see everyone so eager to hit the road. In a large group, I can interact with the cycling community and it’s exciting to see the different riders with their different bikes and outfits.”

Lim, who had recovered from Covid-19 in March, comfortably completed his ride in less than an hour. He added that he was looking forward to returning next year.

For Ahmad Amin and his family, the OCBC Cycle’s City Ride was a chance for them to celebrate Hari Raya as they came dressed in green.

“We just want to carry on the spirit of Hari Raya. It’s rare that we cycle together as a group and today we were able to bond as a family, which is important to me,” the business owner said. 50 year old home. , who was in his baju kurung.

His wife Marni Abdul Halid, who also took part in the ride in traditional Malay costume, hopes they can return with a large group next year, along with their extended family.

Ahmad’s son Mohd Zachary said: “It could be a new way for us to celebrate Hari Raya as opposed to the typical gatherings at home, you can do a different and fun activity together.”

They weren’t the only family present as therapy assistant Jack Chua, 56, took four of his nieces and nephews to their first fitness cycling event.

Having participated in the OCBC cycle as early as 2013, Chua was the reason his nieces and nephews got into cycling. They had registered for the 2020 edition, but their plans were foiled by the pandemic.

Finally able to participate in the event after a two-year wait, Chua’s niece Cao Yuan Yuan said, “Cycling on the city road was pretty cool and a really fun experience. We were thrilled before the event.

Chua’s nephew, Jerry Cao, added, “Cycling on the highway was very enjoyable because you could feel the breeze that you wouldn’t feel if you were in a vehicle.”