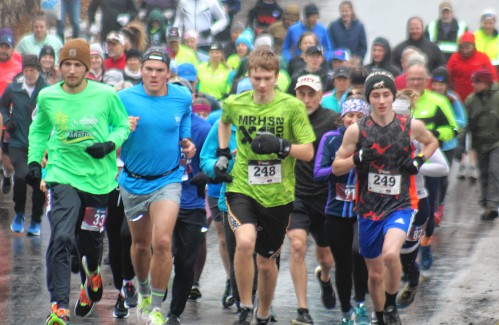 With a siren cry from a Temple-Greenville police car, they were gone – the runners of the Souhegan Lions Club’s annual peanut butter chip hunt.

The first woman to finish was 24-year-old Lara Matthias with a time of 21:13.

Will Philips, a Lions Club member who was competing in the race this year, said the event was started by Doc Porter as a fun race and picked up by the club in 1997. It was then that the event has really started to grow, and it now typically receives over 100 attendees each year. This year, despite the fog and light rain, 87 of the 118 registered participants made it to the start line.

Among the runners was Craig Romano, who ran with several generations of family members in what has become an annual holiday tradition. Romano lives across the country in Washington, but returns every year to spend the holidays with his family in Windham. He and various members of his family have run Chip Chase since 2004. This year his son, aged 7, was one of the youngest participants and his mother, at 82, the oldest.

Romano said his family had no connection with Temple other than annual participation in the race, but said after trying several different 5k races on New Years Day, they preferred this one.

Romano, who turned 60 this year, said he aimed to beat a time of 26 minutes, which he did, finishing first in his family with a time of 24:49.

Up to £ 1bn lost by Scottish workers working unpaid overtime

Vejii announces the closing of the acquisition of VEDGEco USA, Inc.