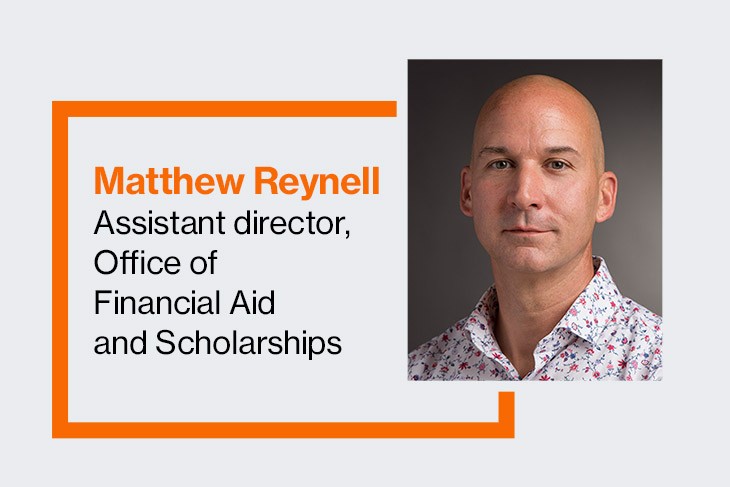 A quiet champion of Rochester youth facing homelessness, poverty, despair and abandonment has won the RIT’s annual award for faculty or staff who have distinguished themselves in community service. Matthew Reynell, assistant director of the Office of Financial Aid and Awards, will receive the 2022 Four Presidents Distinguished Public Service Award at the Alfred L. Davis Awards for Public Service ceremony on April 5.

Established by Vice President Emeritus Alfred L. Davis, the award is presented annually to a member of RIT faculty or staff whose public service and commitment to the community of Rochester and beyond reflects the lives of four presidents—Mark Ellingson, Paul A. Miller, Mr. Richard Rose, and Albert J. Simone—with whom Davis worked.

Reynell has been a dedicated volunteer with organizations such as Children Awaiting Parents, the Center for Youth, Voice for Adoption, an annual holiday giving program to which RIT and its network contribute, and local food cupboards. With Children Awaiting Parents, he is currently a member of the Board of Directors and has served as a member of the Executive Committee of the Board, Chair of the Family Walking Committee and Co-Chair of the Events Committee. He helped build, furnish, and fundraise for the Center for Youth’s Arnett House, which houses LGBTQ+ youth who would otherwise be homeless. He has helped lead clothing drives, Day of Caring volunteers, food drives, and donations of holiday meals and gifts to numerous charities.

After years of posting photos on social media of his growing family of children and grandchildren drinking milkshakes in his kitchen, friends asked Reynell how they could be part of “The Milkshake Gang”, which left him inspired her to launch her own annual fundraiser. Moving into his garage for the first time in 2019, his family now hosts an annual event offering drive-through milkshakes for charity, raising over $3,000 and collecting food and other goods for children in waiting for parents, the Center for Youth and the Veterans Home in Spencerport.

Gifts in Reynell’s name have been made for Children waiting for their parents and the Youth Center. Reynell said he was touched by the award and hopes it can inspire others to take action locally.

“I’m only as good as the people I surround myself with, and my Enrollment Management Division family and the generosity of RIT as a whole is nothing short of amazing,” Reynell said. “Rochester has a lot of nonprofit hidden gems, so my advice is to seek out people doing things in our community and support them. If you can find something you are passionate about, it can make all the difference in the world.

For more information on the award, go to the RIT Government and Community Relations website.