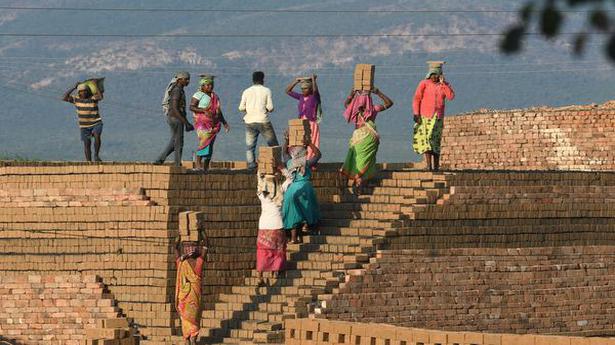 Debt bondage is a form of slavery that exists when a worker is made to accept advances on wages, of an amount or level of interest such that the advance will never be repaid. One of India’s hastily adopted labor codes – the Wages Code, 2019 – gives legal sanction to this horribly repressive and inhumane practice, allowing employers to extend unlimited credit advances to their workers and charge unspecified (and therefore usurious) interest. rate on them.

Despite existing legal protections, vulnerable agricultural, informal and migrant workers were already trapped in a vicious cycle of rising debt and falling incomes, depriving them, their families and future generations of their most important rights. elementary. It remains one of the most pernicious sources of control and bondage in India, and is incompatible with democracy.

What is shocking is that instead of preventing such enslavement of workers and protecting their basic rights, the current government appears to be openly encouraging this practice, nullifying even the weakest safeguards previously in place under the 1948 Minimum Wage Act (now part of the Code).

A free pass for debt bondage

Rule 21 of the 1950 (Central) Minimum Wage Rules (corresponding to the law) set out certain permitted “deductions” from workers’ wages. Clause (2) (vi) permitted “deductions for the recovery of advances or for the adjustment of an overpayment of wages, provided that such advances did not exceed an amount equal to the wages of two calendar months. of the employee â€.

In addition, he said: “in no case will the monthly payment of the deduction exceed a quarter of the wages earned during that month”.

Compare this with Article 18 (2) (f) (i) of the Wages Code, which introduces two major changes from the above.

This article allows deductions from wages for the recovery of “advances of any nature whatsoever (including advances for travel or transport allowance), and interest due thereon, or for the adjustment of an overpayment. salary â€.

The subtle manipulations introduced have enormous implications. First, it removed the â€œmaximum two monthsâ€ cap on a worker’s salary under the previous law, which an employer can give as an advance. This allows employers to lend unlimited advances to their workers, thus tightening their grip.

Second, it legalized the imposition of an interest rate by the employer on such advances, adding the interest clause, and without any details of what might be charged. The net impact is an open sanction for the bonded labor system to flourish.

In addition, the Code increases the monthly deduction authorized for this recovery, up to half of the worker’s monthly salary, against a quarter under the previous law.

Not that the presence of a law under our Constitution, even before labor codes – such as the Bonded Labor System (Abolition) Act 1976 – or various Supreme Court rulings, did not. never dissuaded the system of bonded labor from spreading in all sectors, from agriculture to mining, spinning and more.

In Baran District, Rajasthan (2011-12), a series of Sahariya (a primitive tribal group) families boldly stepped out after each other and spoke about their heartbreaking experiences of violence and even rape at the hands of Sikhs, Hindu castes and Muslim Landlords, for whom they had worked as “halis” for generations. From the Collector onwards, government officials, mostly from upper castes, have erected a wall of resistance by recognizing them as enslaved workers in accordance with the law, denying them any kind of relief or rehabilitation, until what the pressure is building.

In a large-scale primary survey of a mining group in Nagaur District, Rajasthan, for the Mine Work Protection Campaign (2015), we found that one in three workers interviewed had received advances from their employer. ranging from 1,000 to 1,50,000 at the time of joining work. Of these, around 50% said they took the amount â€œto pay off the previous employer or a pawnshopâ€.

But in Parliament, the existence of bonded labor has simply been denied among elected officials, or grossly underestimated.

Debt bondage and forced labor flourish because the government has done nothing to ensure the economic security of workers. And it should get worse if this provision of the labor code takes shape.

It is no coincidence that the disproportionate effect of this enormous regression of the Labor Code will befall Dalits and the landless. In the Nagaur study, for example, we found that 56% of workers were Dalits, compared to just 3% of mine owners.

The large proportion of landless agricultural workers in India to date are Dalits.

Anand Teltumbde writes forcefully in Republic of Castes, “The dominant castes understood that if the Dalits came to possess the means of survival, they would repudiate their status of servitude and the social slavery that accompanies it … Economic independence is an aspect of freedom and its absence. , as a corollary, is synonymous with slavery. ”

Indeed, this is exactly what BR Ambedkar feared playing in India, and hoped to prevent, through his brochure, States and minorities, released in the 1940s (see article 2). In her Ambedkar lecture, 2018 at the University of Edinburgh, Rupa Viswanath, professor of Indian religions at the Center for Modern Indian Studies at the University of GÃ¶ttingen, exposes Ambedkar’s reasoning that “what makes the translation of “One-” man-one voice “to” one-man-one-value “possible, it is the economic freedom of the worker”.

Ambedkar understood that economic slavery was an extreme form of coercion that made political freedom meaningless, and that democracy itself required state intervention in the economic structure to prevent such practices, says- she.

While he proposed a complete overhaul of rural and agrarian land structures, and state ownership of land as crucial in this regard, she explains, he also defined democracy as resting on two premises which required the existence of economic rights.

The first, relevant to the current discussion of labor codes, was that â€œan individual should not be forced to give up his constitutional rights as a precondition for obtaining a privilegeâ€. But that’s exactly what the unemployed are forced to do – just to secure the â€œprivilegeâ€ of working and living, she notes.

So the larger picture that we need to keep in mind is this. Government after government, in the guise of being pro-worker, has plotted to intervene in exactly the opposite direction as desired – maintaining and deepening economic inequality to the advantage of castes and privileged classes, thus keeping the true political freedom of the workers. ‘ to reach. And it is this line that the central government has pursued with even more enthusiasm, in the overhaul and adoption of these backward labor codes.

If farm laws could be repealed, then these anti-labor codes, along with many other dilutions that wrestle the mostly non-existent rights of the much more vulnerable working class, surely must be gone.

Sowmya Sivakumar is a freelance writer